Paspoel is the name of a hamlet near the Belgian city of Tongeren that experienced huge population growth after 1950. Over the past few decades, social housing company Woonzo has built a number of now obsolete residential blocks. In more recent years, these blocks have been demolished in phases to make way for new buildings.

‘The jury liked our design because of its feasibility, living quality, and the well thought-out phasing. We literally wanted to bring more front doors to the ground floor and thus enhance the experience,’ explains Frank Provoost, Senior Architect at the London architectural firm S333 Architecture + Urbanism in this interview (previously published in the Dimension journal).

The project by social housing company Woonzo came about through an open tender by the then Flemish Government Architect. It involved the demolition of the three existing residential towers and the construction of three new tower blocks of eight floors and three additional blocks of three to five floors, altogether providing 192 new apartments. ‘One of the biggest challenges was keeping the scale of it manageable. The only way to do that was to create a diverse range of apartments,’ explains Frank Provoost. ‘Consequently, we opted for a combination of three tower blocks and two low-rise terrace buildings.’ Blocks A, B, and C were designed as traditional tower blocks, each with 34 apartments, four or five to a floor, and a central core. The lower-rise terrace buildings E, D, and F are accessible from the open terraces on the rear of the buildings. The tower blocks have a maximum of nine floors, including the ground floor, the terrace buildings a maximum of five. Each apartment has a small outdoor patio area. 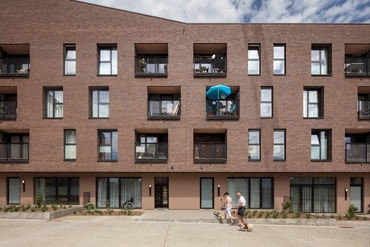 The area around the existing residential blocks was poorly used and lacked identity. The new design of the construction volumes introduces landscape rooms, each with a different character and all delineated from one another. ‘The “square” zone was an express request from Woonzo, which wanted the experience of the new project to extend beyond residents of the site to homes in the surrounding area. That’s why the square was not put at the centre of the project, but asymmetrically,’ explains the architect. ‘Another zone involved a new street running through the centre of the project, thereby connecting with existing paths and adjacent streets. This will help to create a structure that facilitates continuity. We allow local residents to wander through the project as much as possible, rather than just around it. This public route is being constructed and financed by house builder Woonzo, while operation and maintenance will be the responsibility of City of Tongeren. Another request from the house builder was that all tenant residents could continue to live on site throughout the construction process and relocate to the new building with their existing neighbours.’

Efficient use of public space

Other green areas on the Paspoel site include an orchard, a play area, a vegetable garden, an area for young people with a football pitch and benches, and a recreational area for elderly residents with benches and greenery. ‘We had to stay within the boundaries of the impaired zone, which were the contours of the existing development. This was the direct consequence of the archaeological excavations that preceded the previous construction project dating from the 1980s ,’ explains the architect. 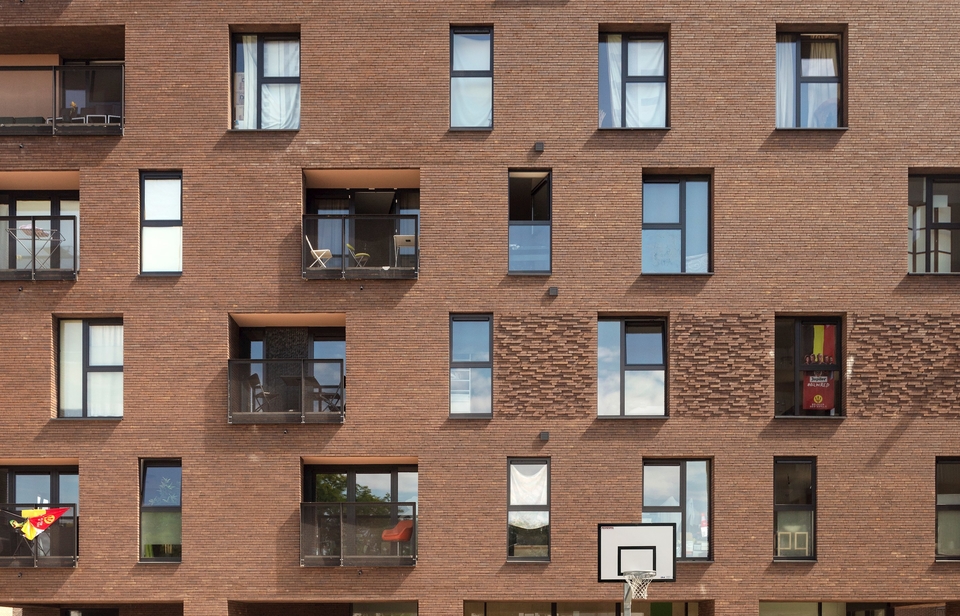 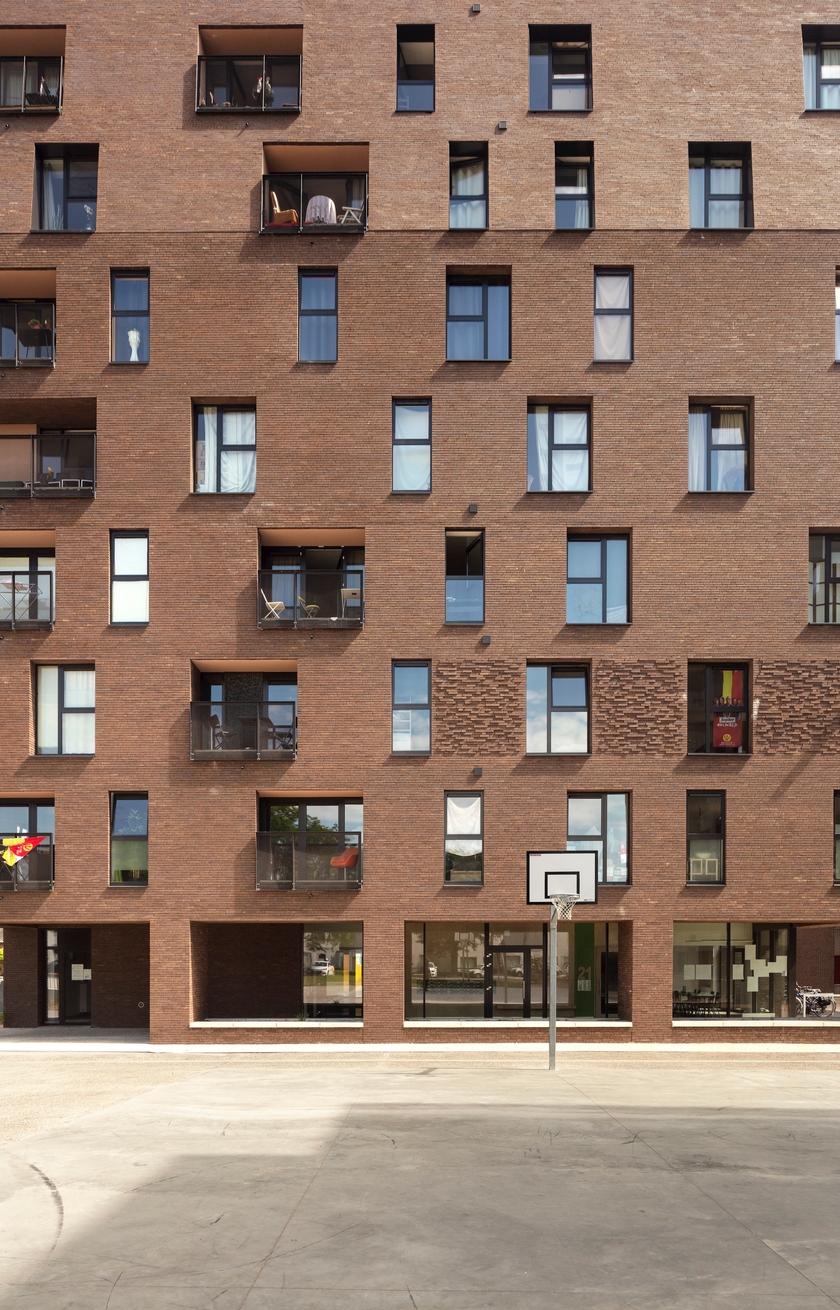 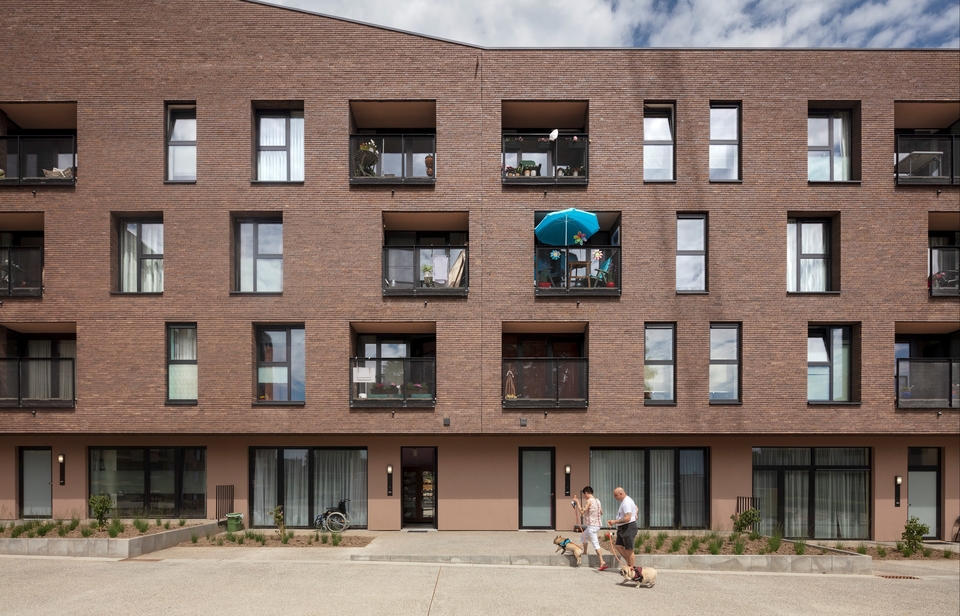 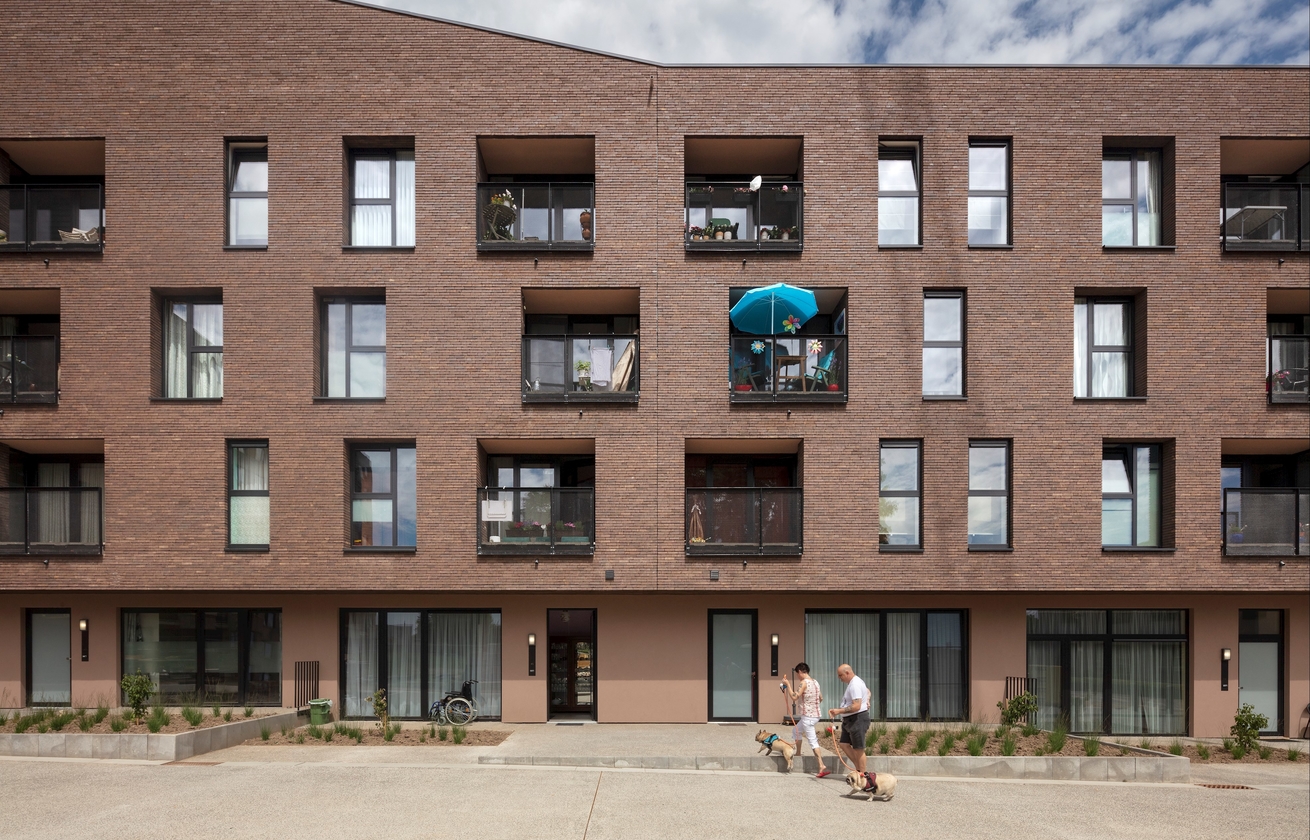 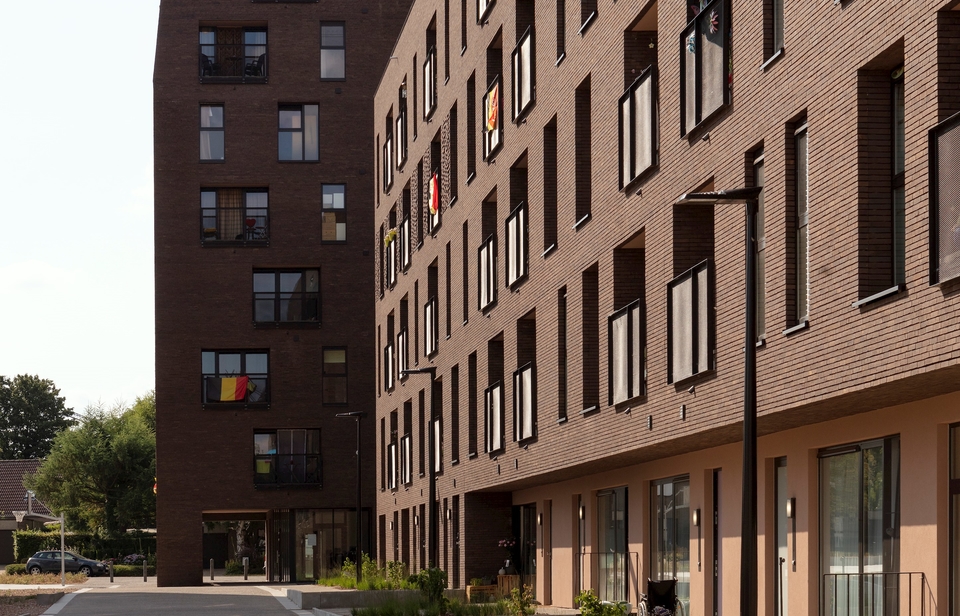 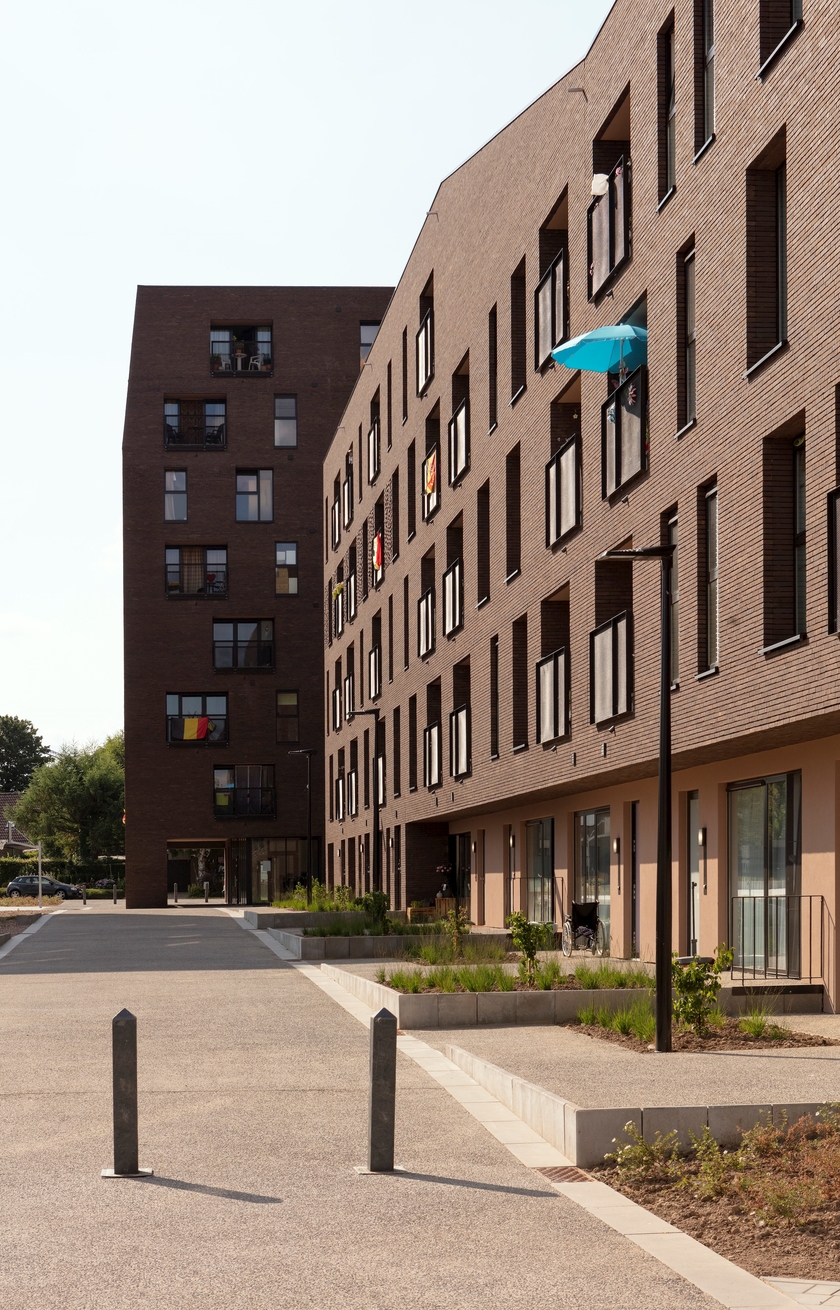 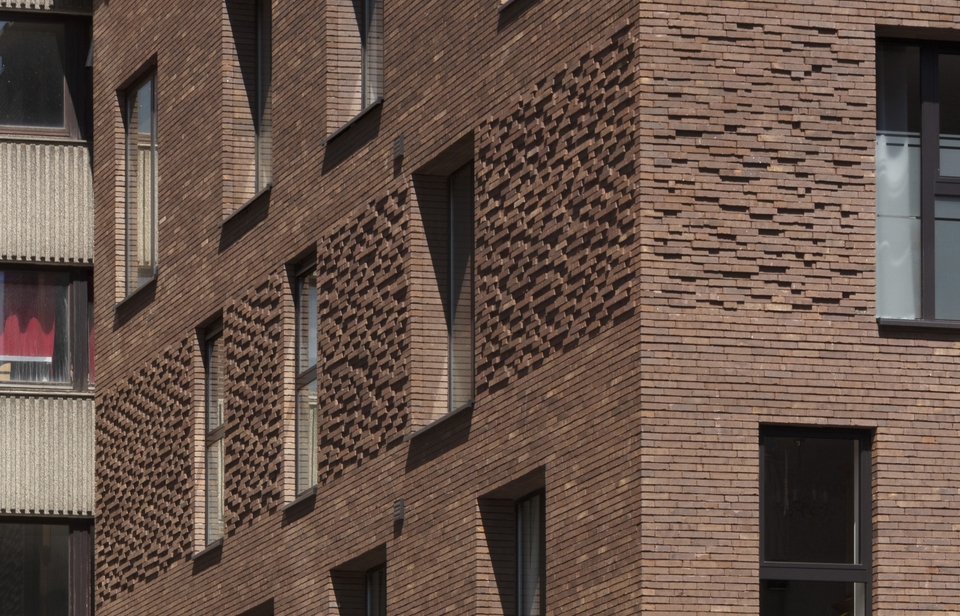 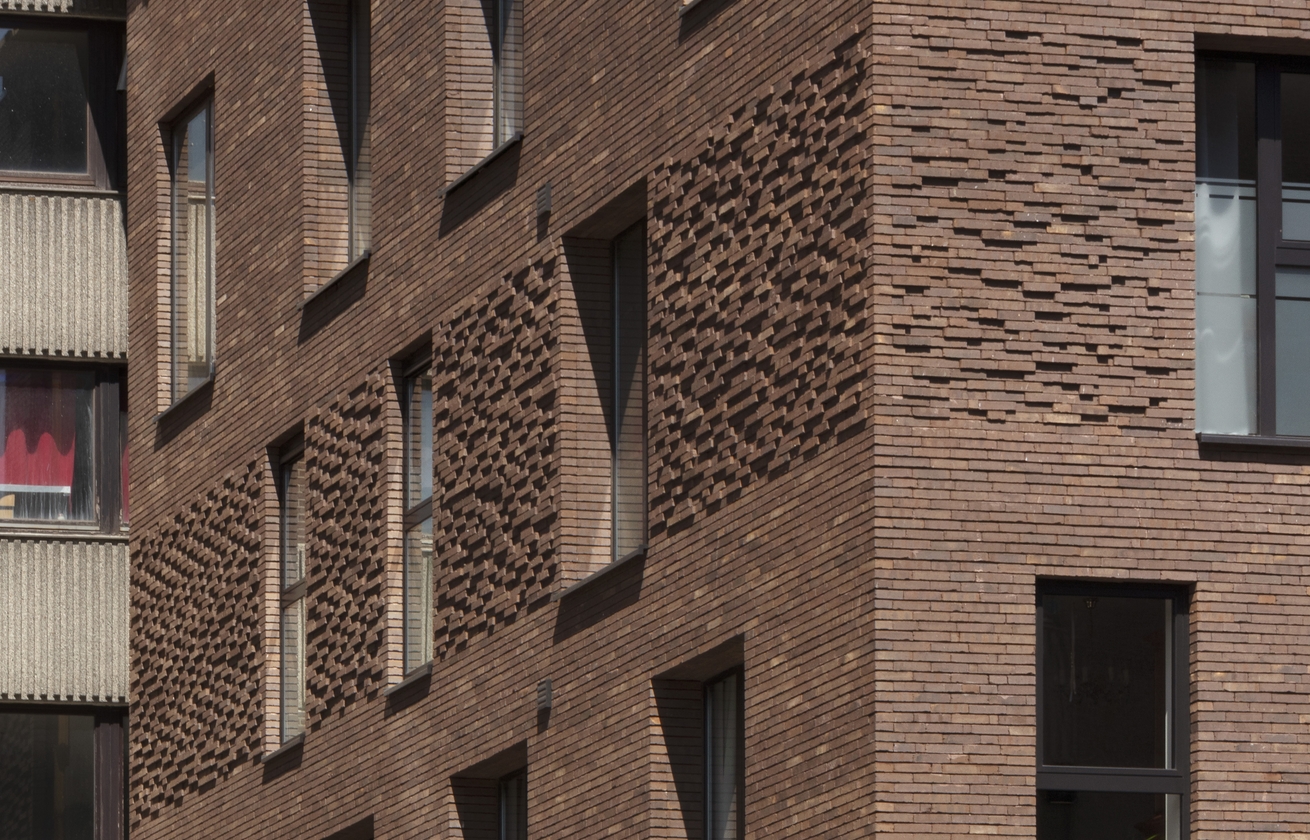 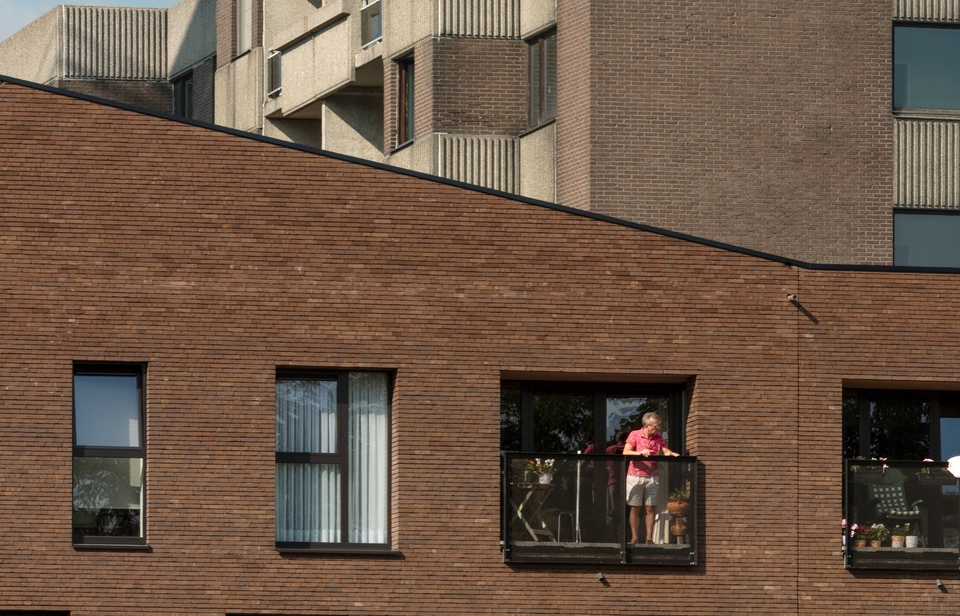 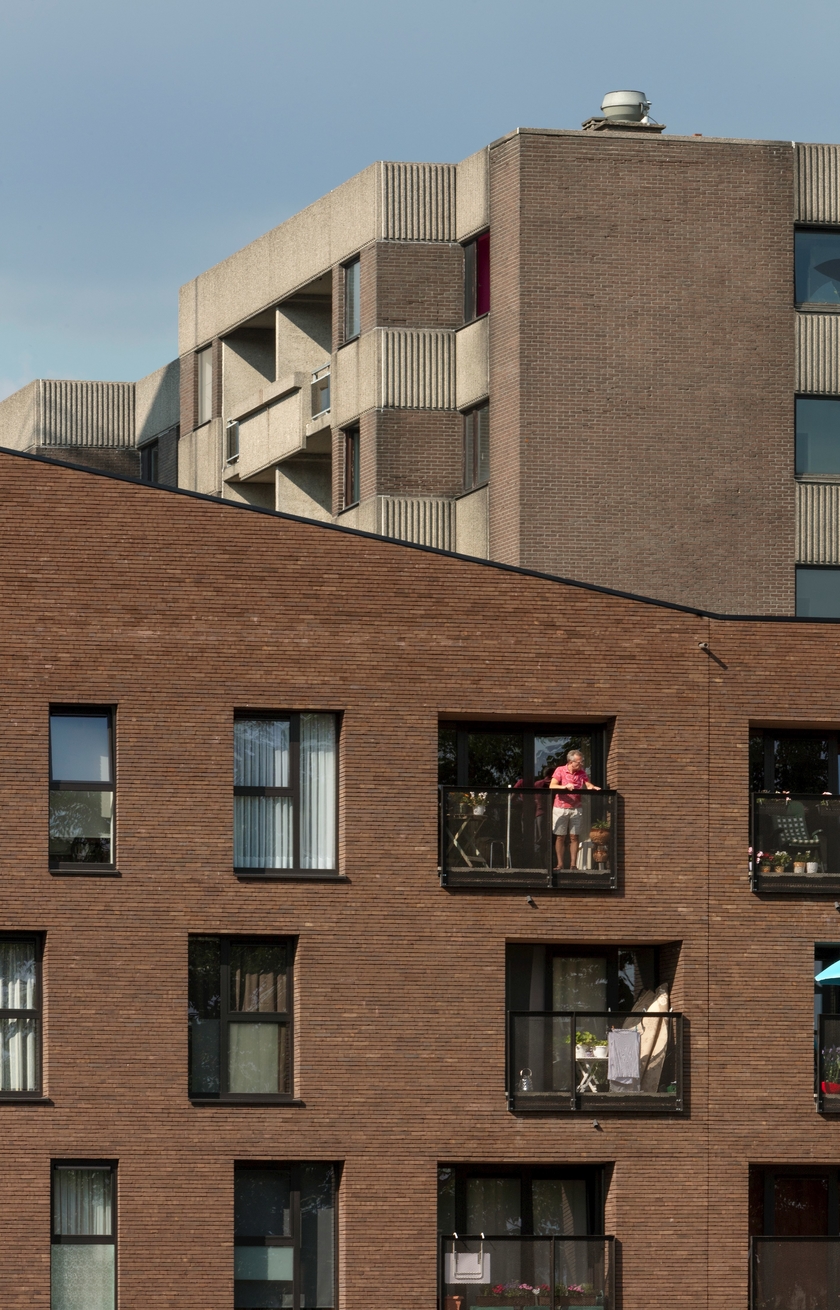 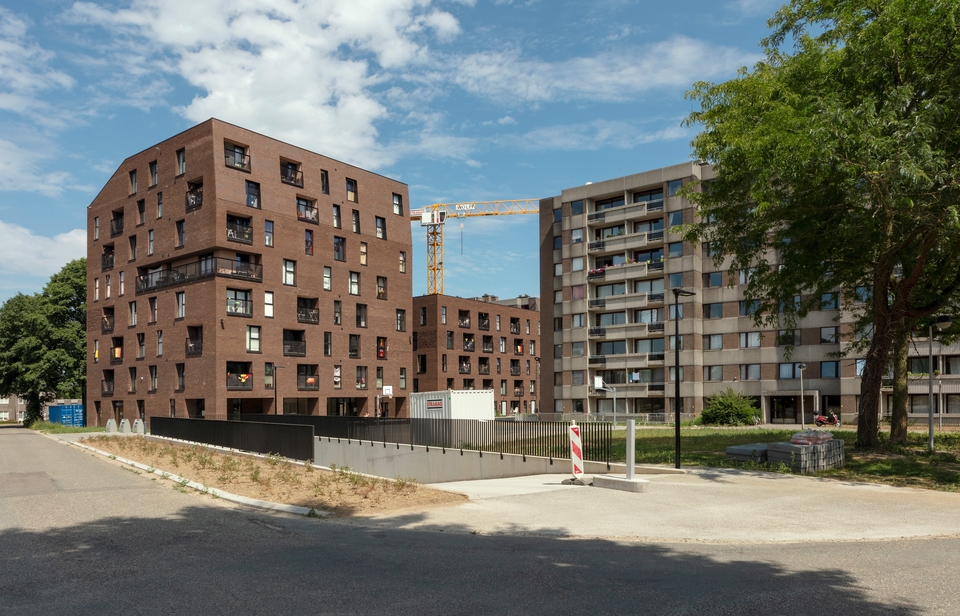 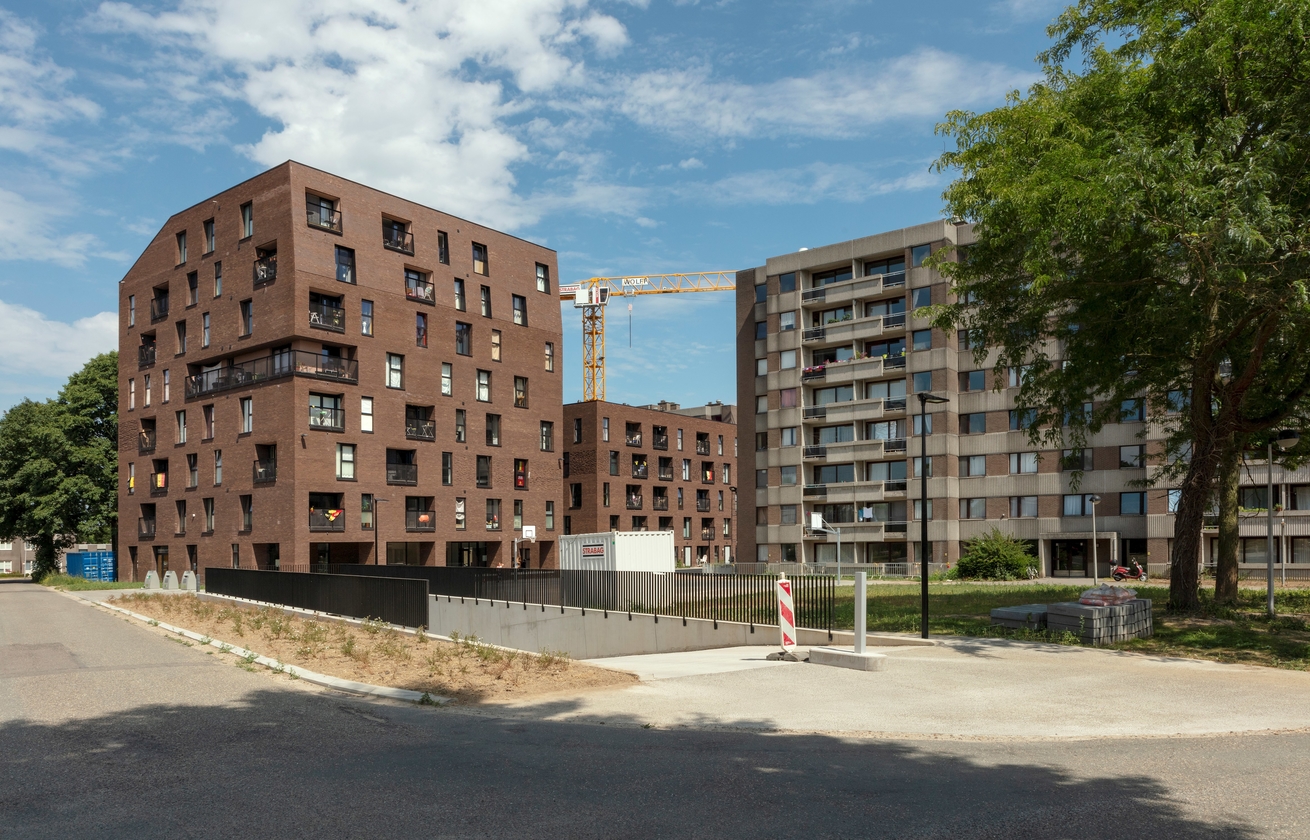 The decision to use the Flemming facing brick meant the ability to play with large volumes. The thin-bed mortar ensures a very thin joint and gives the brick a sleeker look.

In terms of facade materials, the house builder and architects opted for a brown/black nuanced facing brick, parallel to the surrounding residential buildings, for all facades looking out on to the street or square. A softer facade plaster was used to provide the contrast needed for the terrace building adjacent to the gardens. In choosing the brown/black nuanced ‘Flemming’  from Vandersanden there was a clear preference for a textured facing brick with a timeless character. This water-struck facing brick lends itself perfectly to the ‘small scale’ and its rugged character provides for minor colour nuances. They opted for one type of brick at just 5 cm in height, allowing for ample flexibility for interplay, given the large volumes. Consequently, on some facade surfaces, the bricks protrude by a few centimeters relative to other surfaces. A thin-bed mortar was used; the extremely thin joint helps to give the brick a sleeker look.

‘The terraces are constructed from galvanised steel in view of the fairly neutral colour and the contrast with the light-coloured facade plaster. The floors of the terraces are Massaranduba FSC, a low-maintenance, tropical hardwood that turns light grey,’ explains Frank Provoost.

Almost ‘living on a construction site’

For the London-based architects, Paspoel Anders was their first project on Belgian soil. ‘Although house builder Woonzo had taken care of the preparations and communicated with residents, the phasing of a project of this size is always a challenge, particularly in the initial phase when we were constructing the low-rise building and underground car park barely a metre from currently occupied houses. Phased construction is an interesting learning process for everyone involved,’ explains the architect.

On the ground floor of the tower block realised in phase one , the architects also provided a community centre, a facility that was missing from the old Paspoel site. The centre was deliberately sited to fit with the new square. The overall architectural concept helps to facilitate more and better contact between residents, who are a mixture of younger and older residents. 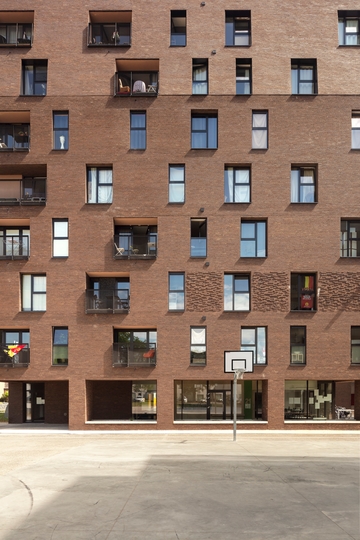 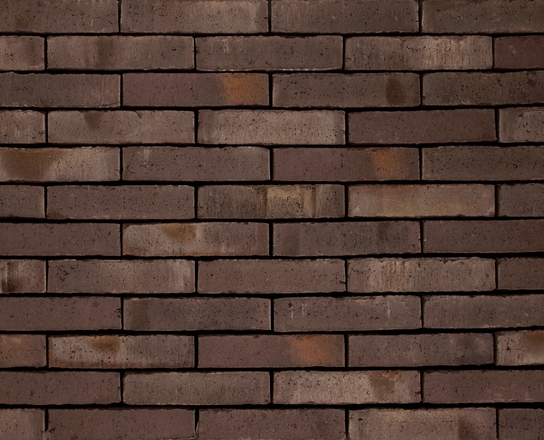 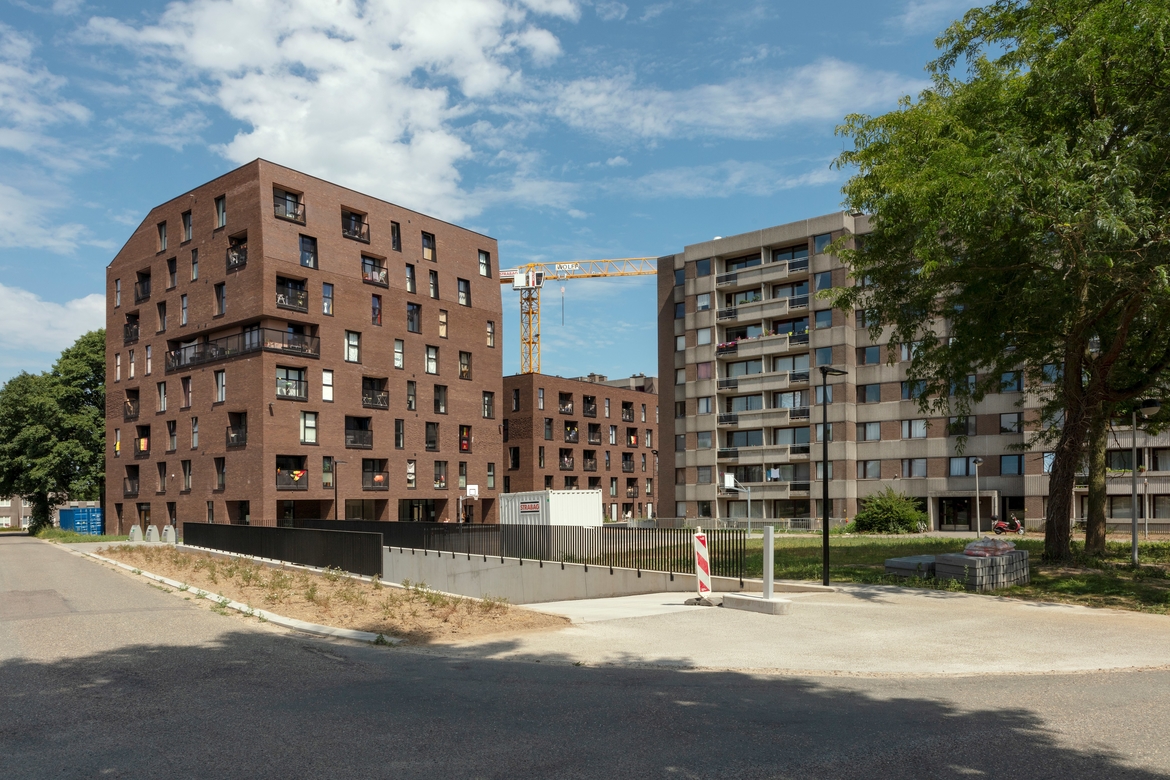 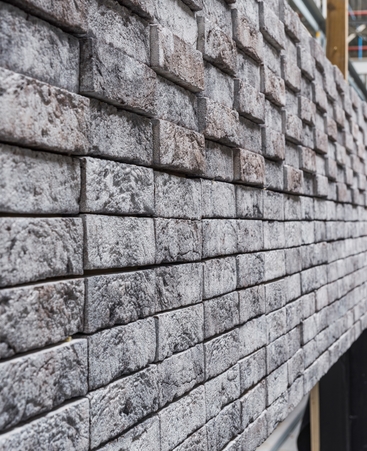 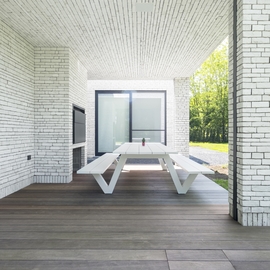 A white home with space and light 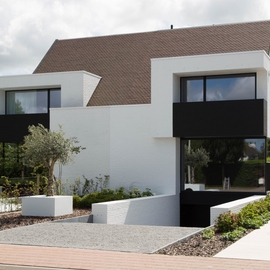 Semi-detached buildings finished quickly and in detail with E-Board®

See our products
in real life

Everything you need to know about facades 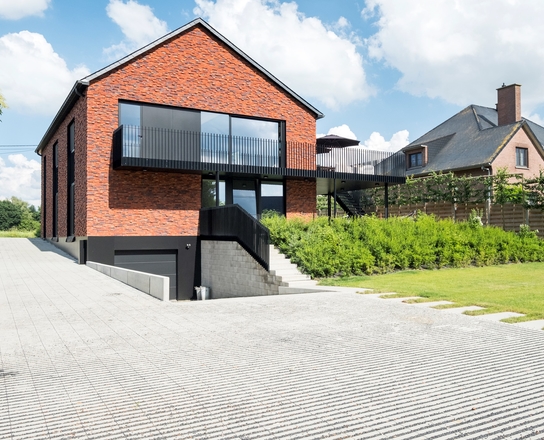 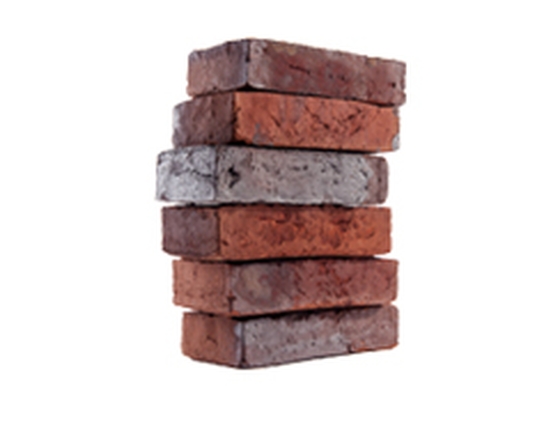 Search for your product 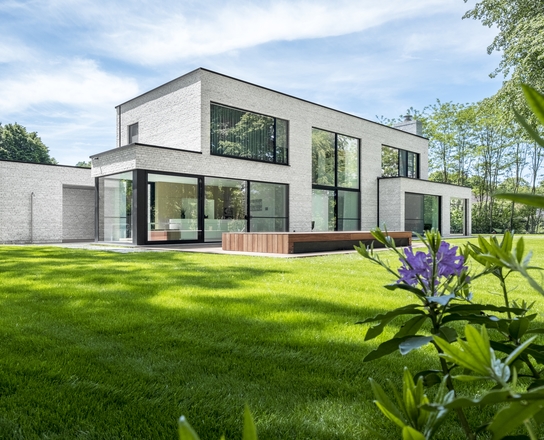 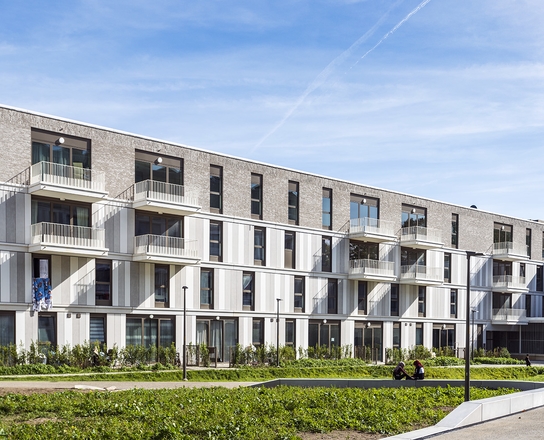